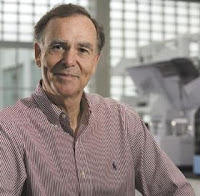 Phil Shugart moved Carolina Liquid Chemistries from California to Winston-Salem in 2008 and set up shop in the Piedmont Triad Research Park.

Shugart will soon take on even more lab space for a spinoff company, Carolina Immunochemistries LLC, which he just incorporated in May.

Carolina Immunochemistries will make what’s called a homogenous vitamin D essay — in other words, a blood test to measure the amount of vitamin D in the human body. Normally, the test is run on a high-priced, cumbersome piece of equipment, but Shugart is willing to bet that the new company can simplify the test to the point where it can be run on an everyday common chemistry analyzer. Read more.