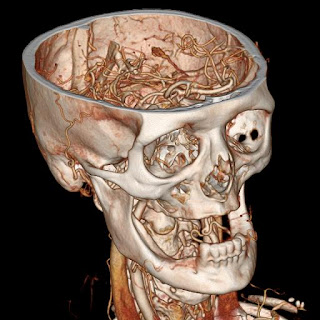 Recently I caught up with Josh Tan to find out a little more about his work at the Wake Forest School of Medicine. Josh’s title is Imaging Informatics Administrator, which might not mean much to some of us, but his work is very important for patients being treated for just about any disease that a patient might be treated for at the hospital. See what Josh does is help researchers and physicians use a combination of imaging technologies to diagnose and plan for the treatment of diseases ranging from heart disease to gunshot wounds. Josh’s work is effectively bridging the gap between the researcher and clinician and the imaging technology in his labs.

Josh uses a broad range of imaging tools that are all dedicated to research. They range from CT, MRI, to PET. The images are used to look at patients as if they had been dissected like a spiral cut ham. (Nice image, I know.) It creates a huge amount of data with 150 images per second and each image taking up more than ½ megabyte. Storage is an issue for sure, but rendering is an even bigger issue. Josh is using bleeding edge technology from TeraRecon, Inc. where each system can have 4 video boards and 16GB of memory per board. If this doesn’t mean anything to you, your average computer these days might have a single board with 1GB of memory. 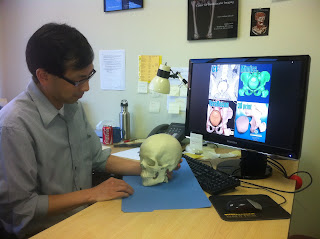 So, enough with the geek speak. Josh helps clinicians and researchers use all of this power to perform a broad range of studies such as car crashes (how the car did or didn’t protect the driver) to gunshot wound trajectories to measuring blood flow through the brain for the study of dyslexics and strokes.

Another technology Josh is helping to bring to the clinic and research lab is 3D printing. Josh can take images taken from a patient and in a few hours use a 3D printer to recreate an injury or disease state which allows better planning for treatment. He can also do real time animation using the same tools that the makers of Shrek and Avatar used. These tools have been instrumental in the research and breakthroughs that Dr. Atala is well known for here in Winston-Salem.

Read more about the Center for Biomolecular Imaging at www.wakehealth.edu/cbi.

As part of this new series for Winston TECH Salem, we’re asking 10 questions. Here’s what Josh had to say:

Born in Chicago, Illinois. Lived all over.

2. What did you study and where?

3. What was your first job?

Built computers for a computer wholesaler in Greensboro

4. What areas have you worked in?

5. Tell us about your family?

Josh is an American Born of Chinese parents who are from Singapore.
He's married to to Thanh Tan who moved to the US as a child from Vietnam with her family.
He has 2 brothers: 1 married to Japanese Woman from Japan; 1 married to Scottish-Irish Woman from Maryland

6. What are your hobbies and Interests?

7. Personal or Professional goals for the future?

To be an entrepreneur, maybe the next Steve Jobs!

Singapore (been back 3 times)

9. Who or what inspires you?

Outside the box thinkers

10. If you were to host a dinner party which 5 people living or dead, who would you invite?