App Helps Those with Communication Disabilities Find a Voice 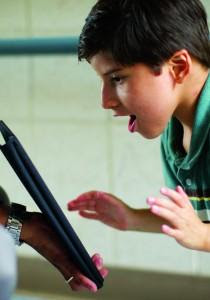 Professor Victor Pauca and computer science students at Wake Forest University have developed an app that can be used on an ipod or iphone to help those with verbal disabilities communicate. Pauca's five year old son Victor, has a rare disorder that severely hampers his development including language skills. The app, called the Verbal Victor, has a series of pictures that can have audio recorded onto them. When the child wishes to communicate something they simply push on the picture and their aim is understood. Because the app uses recording as opposed to a robotic sounding voice, the children become much more comfortable using the app to communicate in the first place. The Verbal Victor app is available at Apple stores for $10 a download compared to other communication devices that might cost thousands of dollars. CNN captures the Verbal Victor in action at home with Victor Pauca and his family
http://www.cnn.com/video/#/video/us/2011/01/17/dnt.ipad.helps.boy.talk.WFMY?hpt=C2
Posted by Eva Wu at 7:47 PM